It is no news to every one of us that FIFA president Gianni Infantino is a big fan of the idea of a 48-team World Cup tournament. 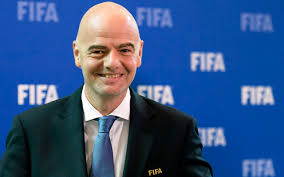 Infantino has spoken boldly since his appointment as FIFA president of his desire to expand the World Cup from a total of 32 participating teams to 48.

The president also wants the 48-team format to make its debut at the upcoming 2022 FIFA World Cup in Qatar.

However, his idea of a 48-team World Cup in Qatar come 2022 has been refuted so many times as various FIFA officials have their reservations on the idea.

Speaking at the Asian Football Confederation’s annual congress in Malaysia, Gianni Infantino once again raised the idea of the expansion of the 2022 World Cup in Qatar to 48 teams and it was greeted with jeers, as expected.

He revealed that he and his team have been holding talks with some Qatari friends, discussing about the possibility of executing his plans.

Many have rejected his idea of an expansion for various reasons, most notably the small size of the country itself.

Infantino acknowledged that the country is too small to host a regular World Cup, let alone one with 48 teams participating but insisted it is only a step in the right direction.

He revealed that any increase will likely require a cooperation with other countries in Qatar’s region as the country cannot successfully host a World Cup of 48 participating teams.

However, with the major disputes between Qatar and its neighboring countries – United Arab Emirates, Bahrain and Saudi Arabia – a cooperation seems like an impossible task.

That said, I don’t think Qatar will be happy to share their World Cup hosting rights with countries that have been accused of boycotting Doha and even pirating Qatar’s BeIN Sports channel. Well, we will wait and see how it all pans out.